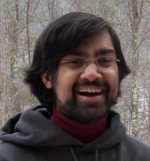 You have reached the homepage of Chiraag Nataraj. I am a postdoctoral researcher at Brown University.

Further details can be found on my research overview page.

My PhD thesis at Brown Unviersity with adviser Professor Axel van de Walle. The cluster expansion formalism for alloys is used to investigate phenomena in several refractory alloys: Co3W (superalloy), NbTiVZr, HfNbTaTiZr, and AlHfNbTaTiZr (high entropy alloys). Density functional theory (DFT) is used to calculate the energies of many small structures which are used to construct a cluster expansion model for each alloy system. These models are then used as Hamiltonians for Monte Carlo simulations in order to explore the dependence of the antiphase boundary (APB) energy on temperature and Al and Hf impurity concentration in metastable FCC Co3W as well as phase segregation behavior in NbTiVZr, HfNbTaTiZr, and AlHfNbTaTiZr. My full PhD dissertation can be found at the official Brown Digital Repository.

Research conducted at Brown University during the course of my PhD. The effects of Al and Hf impurities on the (111) antiphase boundary (APB) energy of metastable FCC Co3W are investigated via ab initio calculations. This work was published in Acta Materialia.

Research conducted at Lawrence Livermore National Lab during an internship. The cluster expansion formalism for alloys is used to construct surrogate models for three refractory high-entropy alloys (NbTiVZr, HfNbTaTiZr, and AlHfNbTaTiZr). These cluster expansion models are then used along with Monte Carlo methods and thermodynamic integration to calculate the configurational entropy of these refractory high-entropy alloys as a function of temperature. This work was published in a special edition of the Journal of Phase Equilibria and Diffusion.

My undergraduate thesis at Caltech with adviser Professor Kaushik Bhattacharya from 2014 to 2015. Peeling experiments and computer simulations are used to investigate fracture and crack propagation in heterogeneous materials. The full thesis can be found here.

A project I carried out at Caltech in the Burdick Lab during the summer of 2014. The key contribution of this research is in the automation of the initialization phase of the SCAPE algorithm to enable the utilization of depth sensor technology to track body motion. As part of the research team, I focused on implementing the new algorithm for the initialization, while a graduate student worked on implementing the SCAPE algorithm and calibrating the sensors. The full report can be found here.

A project I carried out at the Army Research Lab during the summer of 2013. Parameterized CAD drawings of the different parts of a pump for a robotic arm actuator are utilized in a programmatic manner to facilitate optimizing parameters. These CAD models are then utilized to 3D print a functioning pump in one piece. The full report can be found here.

Modeling of NIMs for “Hide-In-Plain-Sight”

A project I carried out at the Army Research Lab during the summer of 2012. The possibility of creating “hide-in-plain-sight” effects using negative index metamaterials (NIMs) was explored with the goal of concealing or disguising an object. POV-Ray, a raytracing software, was used to model NIMs in various configurations, geometries, and gradients of index of refraction to study the effect on an observer's perception of an object enclosed in metamaterial. The full report can be found here.

Interpretation of nonlinear dynamic chaos through music, a project I carried out at Naval Surface Warfare Center, Philadelphia, Summer 2010.

A project I carried out at Autonomous Systems Laboratory, Villanova University during the summers of 2008 and 2009. I worked with a research group; my responsibility was to get a group of NXT robots working in a swarm in autonomous fashion. I did it with a version of Java. A report that was eventually published as a paper at the 2010 Annual American Society of Engineering Education Conference is here. A video of a successful run can be found at various resolutions:

I have been learning tabla since I was 7 years old, and my current guru and mentor is the renowned artist Pandit Samir Chatterjee. I had a tabla concert in October 2008 with Ustad Shafaatullah Khan on the sitar (you can listen to a 10 minute clip here), but my major solo concert was my ರಂಗಪ್ರವೇಶ (raMgapravEsha) in August 2011, and the full video is available here.

I have also had Carnatic vocal training (my most recent guru was Ganakalashree M. S. Sheela) and Western classical piano lessons (at the Bryn Mawr Conservatory of Music) for several years. I love to sing in both Kannada (my mother tongue) and Hindi. Many of these performances are available on my vocal performances page.